Qubool Hai 2.0 is an Indian Hindi language TV Series, produced by Mrinal Jha, under MAJ Production and directed by Glen Barretto and Ankush Mohla. It is the story of Asad (starring Karan Singh Grover) and Zoya (starring Surbhi Jyoti), the two individuals who have surrendered to their ideals, for one the cause of his country, another to her duty towards her family.

But the chemistry in the trailer is simply unmissable. After the teaser and the posters, the much awaited trailer of the series dropped on1st March and premiered on Zee5 Premium on 12th March. The 10-episode romantic drama series named Qubool Hai 2.0 has started streaming now. And we find out some deatails for you…

Like the first season, the chemistry of Asad and Zoya is still the same, eventually even better. While sharing the trailer on YouTube platform, Zee5 wrote, “Asad and Zoya are back with more romance, suspense, drama and action. Watch this trailer of Qubool Hai 2.0, the digital sequal of the popular TV show starring Surbhi Jyoti and  Karan Singh Grover. Premieres 12th march 2021(sic).” 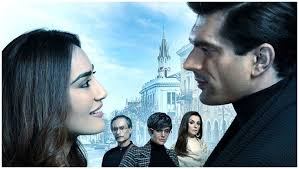 The television show Qubool Hai aired from 2012 to 2016 on Zee TV and later as Karan had quite the show in 2014 so was replaced by Raqesh Bapat. Though the main casts are the original characters from Qubool Hai, but the concepts and the background are very different this time.

Before we got engrossed in their thrilling love story, let’s see some reviews on Twitter and rating on IMDb:

The rating as per IMDb is 8.3 on 10, but as per a user it goes to 10 with a comment saying, “Amazing 10 Episodes, Surbhi Jyoti as Zoya Farooqi us a treat to watch! Highly recommended, please go and watch this series”

The main characters of the series are same but the story and concept is now changed. Some relations will be the same and some new casts make the series more thrilling. In this, Asad Ahmed Khan belongs to India while Zoya Farooqi is from Pakistan. As from the trailer we got some of the details, that Zoya where she was about to get married and Asad’s girlfriend leaves him for someone else. Here the situation occurs when, Zoya and Asad’s path cross and the two become fond of each other.

As the characters are same, the chemistry is same, but the love story also gives the digital spin-off treats the audience with mystery and some awesome action sequences. The 1st three episodes of the series takes me to this conclusion.

Here in the series, you will see the a girl with cheerful and friendly personality as Zoya (Surbhi Jyoti). She is a huge fan of Cricket and Bollywood, who also loves to recite shayaries on every situation, whereas Asad (Karan Singh Grover) is a secret agent for the Indian government, who takes everything very seriously as well as is so much focused and conservative for his work.

ABOUT ZOYA AND ASAD

Surbhi Jyoti is an Indian actress born on May 29, 1988  in Jalandhar, Punjab, India and was first time seen in the ZeeTV show Qubool Hai (2012 ), Koi Laut Ke Aaya Hai(2017), etc. and now in the web series known for “Qubool Hai 2.0”.The actress had also did a web series ‘Tanhaiyan’ in 2017, when the digital medium was in it’s initial stage in India with a big hit on the OTT platform.

Karan Singh Grover is an Indian actor and model, born on Feb 23, 1982 in New Delhi, India. He is known for his work in India Television shows like Dill Mill Gaye and Qubool Hai. He has also starred in the Indian films such as Alone (2015) and Hate Story 3 (2019). The comeback of Karan in the TV industry was made with Kasauti Zindagii Kay. He has also worked in many OTT platform series such as BOSS: Baap of Special Services (2019) and Aadat Diaries (2020).

Some old bits from the original story

The popular line of Zoya Farukhi is adding the series to the nostalgia for “Allah miya, What’s wrong with you?”  Also the funny and random shayaries on Zoya can surely change anyones mood in a moment.

From the television show, other then the lead pair Surbhi and Karan, two prime characters are also reprising their roles in the new version, and they are the mother and sister of Mr. Khan.

Apart from all the new concepts, casts, action and suspense, the series is also full of a number of beautiful locations in Serbia, as because of the shooting site, the castles are the specialty under the numbers of snapshots.

You may have missed